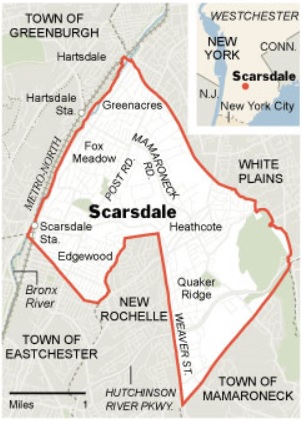 Many residents moving to Scarsdale, NY have a general idea in which area of Scarsdale they want to live in. The Village of Scarsdale is broken down into five different areas by elementary schools. These areas are Heathcote, Quaker Ridge, Greenacres, Fox Meadow and Edgewood.

If you're among an exclusive crowd of wealthy and refined patrons of the arts, then you'll feel right at home in the Scarsdale: a neighborhood in which more "urban sophisticates" live than 99.9% of neighborhoods across the U.S. Here, your neighbors are defined as having urbane tastes in literature, music, live theatre and the arts. They are wealthy, educated, travel in style, and live a big city lifestyle. In addition to being an excellent choice for urban sophisticates, this neighborhood is also a very good choice for highly educated executives and families with school-aged children.

Heathcote is the most centrally located area of in the Village of Scarsdale. Homes are primarily of large with four, five or more bedrooms. Most of the residential real estate is owner occupied. When you walk or drive around this neighborhood, you'll instantly notice the size of the homes here which definitely makes a strong visual statement. There are nearly no other types of residential real estate in the neighborhood.

In the Heathcote area of Scarsdale, the children all attend the Heathcote Elementary School on Palmer Road. Heathcote School was a model of the modern campus style that was just coming into vogue when McCall's magazine gave it national coverage in 1955.  It was built as a translation of educational theory into architecture, based on a humanist approach. Constructed on a rolling hilltop of twenty-two acres, Heathcote dramatizes an indoor/ outdoor relationship. Heathcote's unique features begin with a one level structure that provides grade specific classroom clusters with a little-schoolhouse atmosphere.

In the Quaker Ridge area of Scarsdale, the children all attend the Quaker Ridge Elementary School on Weaver Street. Quaker Ridge homes are primarily made up of large homes with four, five or more bedrooms. When you walk or drive around Quaker Ridge, you'll instantly notice the size of the homes here which definitely makes a strong visual statement. There are no other types of residential real estate in the neighborhood.

Greenacres homes are primarily made up of large single-family homes with an average of four or five bedrooms. Most of the residential real estate is owner occupied. The Greenacres neighborhood is relatively historic, and most homes were built between 1900-1930's and in some cases, quite a bit earlier.

Fox Meadow is on the eastern side of the Village of Scarsdale. It borders Central Avenue and Hartsdale.  Children who live in the Fox Meadow neighborhood attend the Fox Meadow Elementary School on Brewster Road.

Homes in Fox Meadow are highly sought after by commuters who want to be able to walk to the Scarsdale or Hartsdale train stations. Executives, managers and professionals make up 78.1% of the workforce in the Fox Meadow neighborhood. For this reason, this Fox Meadow stands out as unique. Fox Meadow is that it is the only area in Scarsdale that Condos and Co-Ops are available.

If you find historic homes and neighborhoods attractive, you love the details, the history, and the charm, then you are sure to be interested in this neighborhood. A good majority of the single-family homes in Fox Meadow were built before the 1930's, some built considerably earlier. An additional majority of single family homes were built in the 1950's.

Edgewood is located in the most eastern area of Scarsdale. It borders the Bronx River Parkway, Eastchester, and the northern section of New Rochelle. Children who live in the Edgewood neighborhood attend the Edgewood Elementary School located at One Roosevelt Place.

Completely renovated 3 bedroom + den/guest room, 2.1 bath mid-century Ranch style home at the end of a private driveway in the Greenacres section of Scarsdale. This hip h...

Display of MLS Data is usually deemed reliable but is NOT guaranteed accurate by the MLS. Buyers are responsible for verifying the accuracy of all information and should investigate the data themselves or retain appropriate professionals. Copyright 2022 OneKey All rights reserved.